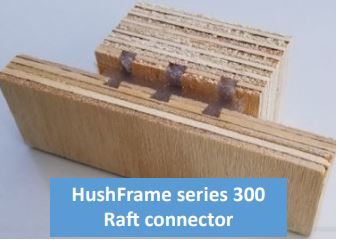 Sound energy passing through the wall is significantly decreased. When sound (vibrations in the air) impact on one side of the wall, the air pressure variations induce vibration on the wall.

These vibrations re-radiate from the other side of the wall as air pressure variations (sound).  This effect is highly frequency dependent.  Generally low frequencies are attenuated much less than high frequencies.

Wall as an effective noise barrier

Several physical phenomena within the wall affect the sound attenuation of the wall.  One important parameter is mass.  The higher the mass, the less sound can transmit through it.  Therefore, a concrete wall attenuates sound better than a wood frame wall.

To improve sound attenuation of a wood frame wall, it is assembled from multiple layers.  Beside the surface mass (drywall) of the wall, noise transmission is reduced by sound absorption inside the wall cavity.  Therefore, walls have insulation in cavities.

Ability of a wall assembly to attenuate sound is rated by a number called sound transmission class (STC).  The minimum STC value of a party wall mandated by the National Building Code of Canada is STC 50.  For a wood frame wall to exceed this minimum requirement, the wall must be a double frame wall.  The two sides of the wall are separated by an air gap, preventing direct sound coupling between the sides of the wall. This wall is typically 9-inches thick.

An alternative to a double wall is a wall with resiliently attached drywall. An example of such resilient attachment is Hushframe Raft. This component consists of two wooden parts separated by a layer of silicone rubber.  One side of the component is attached to studs or joists, the other side is attached through a furring strip to drywall. There is no solid connection between the wood structure and drywall, a layer of flexible silicon rubber separates them.  This layer prevents sound vibration transmission through it.

Hushframe Raft is the most space efficient decoupling component on the market.  It is particularly compatible with wood frame construction, wall studs or ceiling joists. However, it is equally useful and space efficient in steel frame structures.

Check this video for demonstration:

Hushframe Raft even in the simplest wall assembly meets the minimum National and Ontario Building Code requirement for separation between residencies. It saves valuable floor space in multi-residential construction.

For limited time we will send you a free (in Canada only) sample of a Hushframe Raft Connector. Just submit the form below.

To purchase 10 or more Hushframe Rafts use the link (you need one raft for about 4.3 square feet of wall or celling).